In order to find a metric to help other investors determine whether a stock is a value trap or not, I’ve developed a formula which incorporates the analysis usually performed to find value stocks into a simple number.

The Value Trap Indicator formula is split into 7 parts, with each aspect contributing to the overall number. The lower the number, the more desirable the stock is, from both a valuation and company strength standpoint.

What is important to realize about this number is that it is dependent on the stock price, so the same company can look like a good value play one day and then look more like a value trap at another time, if the stock has soared beyond a reasonable buying price for example.

As a side note, all the numbers used in my analysis are taken from the most recent annual report, unless a different year is indicated. The price comes from the daily stock quote for the given day the analysis is performed. Numbers or ratios from other financial websites or stock screeners sometimes can’t be trusted and therefore aren’t implemented.

I’ve tested my equation with several well known financial situations to see if it appears initially accurate. The first test case is with the Lehman Brothers’ (LEHMQ) bankruptcy in 2008. What is very interesting about this test is that Lehman Brother’s had very strong numbers in 6 out of my 7 categories, but failed miserably in the debt category. If anything, this result further reinforces my equation’s validity as it took a stock that appeared to be in a strong financial condition on many standards and exposed its actual weakness.

It can be argued that dividend payout is actually too low, as management is keeping too much profit for itself, and this is factored in to the equation as well from the integration of dividend yield into x7. Also, a relatively new investor might’ve looked at debt to equity of 16.92 and not understood its inherent danger, which is another reason my equation becomes valuable as it gives a tangible weight to such issues (x5 being much greater than 1).

The results for Lehman Brothers are as follows:

With a VTI greatly over 800, this stock was an obvious value trap and investors who bought it in 2007 were vastly disappointed with its bankruptcy in 2008.

If you had instead tried to find a stock with much better value in the very overpriced 2007 market, you would’ve found a solid company selling at a relatively fair price in Walmart (WMT):

Buying this company instead of Lehman Brothers would’ve instead given you gain of 155% not counting dividends, calculated from average share price in 2007 of $47.23 to current price $73.03. Considering the market crashed shortly after 2007, a conservative value strategy at this time would’ve resulted in a much lower loss (or higher gain) than an aggressive strategy willing to overlook a weakness or two.

One of the biggest reasons why many mutual funds and individual investors consistently underperform the S&P 500 index is because they change or adjust their investment strategy too much. With the wild swings of the market of fear and greed that we seem to love, many stock strategies would become winners after experiencing hard portfolio losses if only the investor stayed the course.

Dave Ramsey puts it in clear wording best, stating “the only ones who get hurt are the ones who jump off the roller coaster.” Many mutual fund companies fire the investment manager whose performance has been sub par right before the portfolio was about to make a comeback, as stocks often do. Instead, these stocks are bailed out of and losses turn permanent.

Thus the importance of staying the course must be repeated and emphasized. That being said, I have researched intensely and as broadly as I can, having read about popular stock strategies such as value investing, growth large cap, random walk theory, efficient market hypothesis, small cap strategies, greater fool or castle in the sky theory, basic technical indicators, growth investing, indexing, mutual funds, Dogs of the Dow, margin of safety, invest in what you know, growth dividend investing, income investing, bargain bin, buy and hold, momentum trading, ETFs, capital intensive companies, beta based risk, and tangible asset valuation.

With this knowledge I have formulated my Value Trap Indicator and carefully derived each individual category.

Testing the indicator further reveals that investors would’ve been able to avoid 29 of 30 stock market bankruptcies since 2000, for an over 96% success rate. Turns out that bankruptcies aren’t as surprising as it may seem.

Also realize that the strategy is complemented by dollar cost averaging and long term holding of stocks. This means that the same amount must be invested in a recurring time period, such as monthly, and all stocks are to be held for 1 year or longer. A stock should never be sold just because its price has come down, and should only be sold to take profits or because either the stock is heavily overvalued or the fundamentals of the company have deteriorated.

Luckily for those without the keen ability to recognize when such an event is occurring, the Value Trap Indicator will flag a such a company with a very high value. 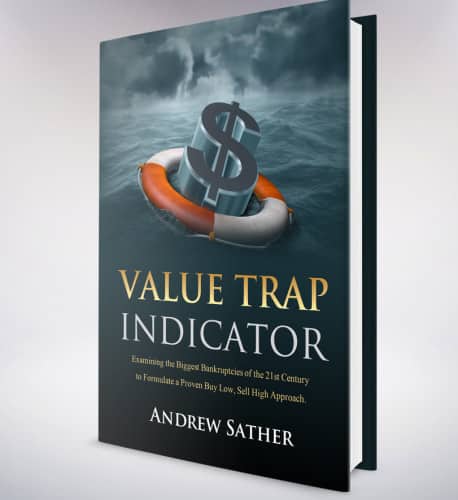