Combined Ratio – How to Calculate it With Examples

How do we determine if the insurance companies we invest in make money? Is there some secret formula or hidden clues in the financial reports? In a word, yes. The ratio refers to the combined ratio and can reveal everything to us. 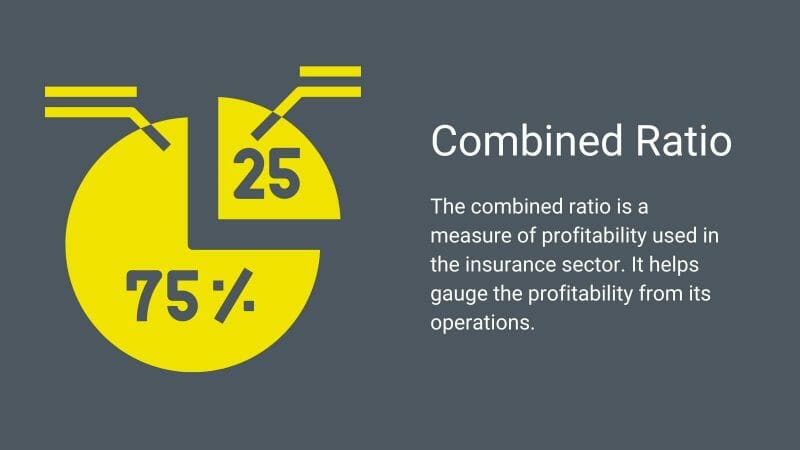 Well, maybe not all, but quite a bit if we know where to look and how to interpret the numbers.

Part of the fun of learning more about insurance companies is seeing what makes them tick. Or to see how they make money.

Keep this in mind as we further investigate the combined ratio’s intricacies.

What is the Combined Ratio?

“The combined ratio is a measure of profitability used by an insurance company to gauge how well it is performing in its daily operations.”

We can calculate the combined ratio by taking the sum of the incurred losses and expenses and dividing them by the earned premium.

Thus we get the formula:

Analysts and investors alike usually express this ratio as a percentage. If it is less than 100%, the company profits from its underwriting operations.

A combined ratio of 100% might still mean the company is profitable, especially if it makes significant income from its investment portfolio.

It only concentrates on underwriting operations.

Long-lasting investments are music to a value investor’s ears; we want the companies we invest in to last long.

There are multiple parts to the incurred losses:

Re-evaluation of claims: Involves reviewing all claims currently being processed to help determine if their value is higher or lower than the amount recorded first.  Before paying any claims, an insurance company must first investigate the claims to verify if the loss occurred and that it is not a fraudulent process.

Once the company is satisfied that the claim is genuine, it sets to determine the accuracy of the recorded value. If the newly determined value of a claim is higher than the recorded claim, the company will have to pay a higher amount than planned. The excess claim paid is a loss to the insurer since it exceeds the amount recorded in the books.

Change to Loss Reserves: The law requires insurance companies to maintain an adequate reserve from which they will make payments of old and new claims anticipated in the next period. The standard level of reserves varies from 8% to 12% of the annual revenues, depending on state laws.

Incurred Expenses: An incurred expense is a cost incurred when a business purchases goods or services on credit. The company may purchase a credit card or a billing arrangement with the seller of the goods. Most companies buy raw materials in bulk from manufacturers and wholesalers on credit, with an agreement to pay later.

An incurred expense becomes a paid expense once the business has paid the cost to the supplier of the goods or services. Most of the time, incurred expenses are paid after incurred, while at other times, they may take several years before being paid.

How to Calculate the Combined Ratio

Let’s first identify the Loss Ratio and where we can find the corresponding data.

The Loss Ratio shows the relationship between incurred losses and earned premiums, expressed as a percentage. Incurred are actual paid claims plus loss reserves. The loss reserves are liabilities due to known losses that the insurer has not yet paid.

Insurance companies with very high loss ratios may need to raise premiums to stay profitable and ensure their ability to pay future claims.

Consumers pay too much for the benefit received when the loss ratio is low.

The loss ratio discusses monies lost, and with an insurance company, this will refer to claims and expenses related to claims.

Claims are monies the insurance companies pay back to us when we suffer an injury, accident, or some other catastrophic loss.

To calculate the loss ratio, we will look in the financial documents for the term claims and or claims expenses.

In the case of Allstate (ALL), we can find this info in the Consolidated Statements of Operation or Income Statement.

We can find premiums in the same statement under the Revenues section.

Remember that premiums are a larger part of the revenue of property & casualty insurance companies than they will be of life insurance.

In the insurance business, it is going to include line items such as:

The expense ratio in the insurance industry determines profitability by dividing the costs associated with acquiring, underwriting, and servicing premiums by the net premiums earned by the insurance company.

We can see that we primarily use the income statement to acquire this data. It makes it easier to find the data and determine our ratios.

I would be remiss if I didn’t mention that some companies will be transparent about their combined ratio and provide the ratios quite freely, plus the loss and expense ratios; thus, taking the calculations out of our hands and making analysis a little easier.

Others will not list it or make it a little more difficult to calculate by making the terms more obscure or hiding them altogether.

Like any other investigation, use the information to give you an idea of the management and whether or not they are free and open about their operations.

Now, we should understand the combined ratio and where to find the data to determine our profitability; let’s put the knowledge to use so you can calculate the ratio for yourself.

The first company I would like to look at is Cincinnati Financial Corp (CINF). Cincinnati Financial is an insurance company that provides property-casualty coverage and operates out of Fairfield, Ohio. They are a Dividend King, meaning they have paid a rising dividend for over 50 years.

Looking at the 2021 10-K, we find the income statement and our numbers to determine the combined ratio.

All numbers listed in any financial statements we use will be in the millions unless otherwise stated.

The loss Ratio will be up first:

Next up will be the expense ratio:

After calculating the loss and expense ratios, we will add those two numbers to get our combined ratio.

The combined ratio score of 91.2% indicates Cincinnati Financial continues doing a good job of creating profitability from its underwriting business. The combined ratio remains great because most of the income they derive comes through the generation of premiums.

Remember that our goal is to find a company generating a combined ratio of under 100%, indicating a profitable company.

Next, look at The Hartford (HIG), another property-casualty company with total assets of $62.3 billion and shareholders equity of $13.1 billion.

Now that we have the info from the income statement, let’s get to work.

Next up the expense ratio.

Ouch, that indicates that Hartford is operating at an underwriting loss.

Discovering the combined ratio is fun; why don’t we take a look at one more company?

The last one is Chubb (CB), another property-casualty company dabbling in life insurance. Chubb has a market cap of $73.39 billion.

Putting the loss ratio and expense ratio together, we get:

Our newly calculated combined ratio tells us that Chubb is quite profitable from an underwriting aspect.

Chubb is another great example of a company being completely transparent on the financial reports to help us, shareholders, determine the right numbers and thoughts on our possible investments.

As you can see, calculating the combined ratio is simple once we know where to find our numbers.

The biggest trick is knowing the terminology and discovering where to find the numbers in the financial reports. It can be tricky if you don’t know what and where to look.

We have seen how the combined ratio can help us determine which insurance companies are profitable and which might struggle.

For life insurance companies, we will have other ratios and numbers to determine profitability.

As always, thank you for taking the time to read this article. I hope you found something valuable to help you with your investing journey.

Learn the art of investing in 30 minutes

Join over 45k+ readers and instantly download the free ebook: 7 Steps to Understanding the Stock Market.