Investors have a myriad of options available when it comes to analyzing a business. The return on capital ratio is one fantastic way to do this. It’s an especially strong metric when it comes to identifying companies with a good growth track record or prospects.

But I’m concerned there’s a growing popularity with the return on capital ratio and too much reliance among many other fund managers who have been successful thus far. It could lead to lower performance in the coming years, especially in the case of a bear market.

There are many flavors of the actual return on capital formula. Check out the successful value investor and my friend Ken Faulkenberry’s article if you’d like to see 5 variations of this important calculation.

Since I personally come from a very value investor based school of thought, and much of my website teaches value-based principles, I’m going to focus on Joel Greenblatt’s definition of return on capital. This is likely the formula many successful fund managers are using as self-proclaimed value investors themselves.

The Magic Formula (Joel Greenblatt) return on capital equation is:

Instead of examining this with an example, let’s look at this at a higher level. Testing the validity of equations through a logical examination is better than blindly following a widely used process.

EBIT is simply earnings before interest and taxes. It’s basically a measure of a company’s operating earnings, which gives you good insight on how well the core business model is performing.

An obvious advantage of this is it gives a sense of how much demand there is for the company’s products or services and exposes companies that consume a lot of cash in order in relation to their sales—creating smaller profit margins and indicating possible higher risk.

Net Fixed Assets is another way to describe net tangible assets. The “net” portion refers to tangible assets minus liabilities. This number is commonly negative or positive depending on the business model.

For example, a company with a strong brand may have negative net tangible assets because it doesn’t need much capital to create profits, the popularity of its brand name already creates very high demand. In the fundamental analysis camp of the stock market, a company like this would be called a low capital intensive business.

I’ve covered the debate whether tangible or intangible assets should be preferred before. For the sake of brevity, I’m going to assume you’ve read the article and have insight on these implications.

Working Capital is simply current assets minus current liabilities. Like net fixed assets, this is a measure of a company’s balance sheet—seeking to determine short term liquidity.

In a way, working capital covers aspects of the cash flow statement without having to look there. Current assets includes cash and cash equivalents, which is the same number as net cash or “cash at end of period”. Again, I’ve covered net cash previously and why I believe it is the most important metric of the cash flow statement. A company with large net cash can more easily weather short term earnings difficulties without taking on large amounts of debt quickly.

Notice which metrics are in the numerator and denominator. EBIT is at the top, so the larger this number is the better. Net Fixed Assets and Working Capital are on the denominator, indicating these metrics are preferred to be lower.

On the surface this may seem counterintuitive.

If Net Fixed Assets indicates a company with strong tangible assets, thus having a higher liquidation value if bankrupted and less chance of an incorrect evaluation of asset value, isn’t a higher number preferred?

In the case of lower Net Fixed Assets, the investor is seeking business models that don’t require much capital to run and expand—a low capital intensive business.

This assumes of course that management will be able to make the right decisions to find this growth, but you can make the same argument for high net fixed assets companies. Buying more tangible assets doesn’t necessarily equal more earnings growth regardless of the capital intensiveness of the company.

But, the low capital intensive business has more of a chance to see this growth faster. It’s almost like a higher risk, higher reward possibility.

This is particularly true if the company hasn’t saturated all of its tangible assets that efficiently produce high earnings, as the low capital intensive aspect of the business means that retained earnings are more likely to produce higher future profits. An example of this would be a chocolate company that is popular worldwide and just needs to buy more land and stores in other places of the country or world.

What about low working capital?

In a way, this metric is another way to measure how capital intensive the business is—just like net fixed assets. If a company can sustain high earnings with low working capital, this means the company likely doesn’t need much cash on hand to have the business model see success.

If the inventory value of current assets is low, that means the company likely doesn’t have to carry much inventory to create earnings.

Low accounts receivable, another component of current assets, could indicate a company that receives its cash quickly.

This is easy to understand if you look at the other side of this.

Finally, a high desired EBIT should be self-explanatory. Business with great operating income are less likely to have earnings propped up temporarily from weird timing with interest and taxes, and can just simply indicate a good business model.

Yes, you’d be right. Return on capital is a commonly used metric that investors use to identify earnings growth. It favors companies that are capital efficient.

The compounding effect I talked about above could lead to compounding in the share price. And the potential quickness of this growth can lead to excitement in the stock market, creating heavy positive momentum and really carrying the stock to higher valuations.

Which leads me to the problem I see today.

Warren Buffett has publicly said how over time he’s moved his investing approach away from Benjamin Graham’s “cigar butt” strategy and more towards high quality businesses at a fair price.

When you look at his portfolio and past investments, he’s really saying that he prefers highly efficient companies, high return on capital companies, low capital intensive businesses… different words that all describe the same thing.

Unsurprisingly, many famous value investing fund managers have followed suit. In Hein’s and Tilson’s great book called The Art of Value Investing, they share quotes of many of these men saying they’ve graduated from Graham into more high quality businesses.

The Reason Why I’m Concerned

I’d be remiss if I didn’t say that many of these investors have stated the disclaimer that they are still accounting for valuation. Obviously, if you can get both great valuation and return on capital you likely have a very successful investment on your hands. It’s the beautiful synergy of value and growth.

What I fear is a trend that relies on the return on capital mindset too heavily. As stated above, a high return on capital can indicate both high reward and high risk. So if valuation is ignored too much, the margin of safety evaporates as does the lower risk profile. 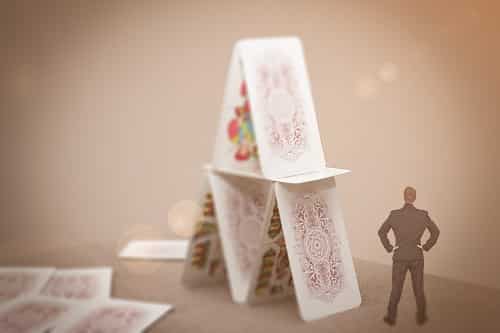 It’s almost set-up as a house of cards. High return on capital does fantastically well when the economy is booming and profits are flowing. Growth and growth potential increases exponentially.

Yet during tough times, negative business results can also grow exponentially. High return on capital rewards low working capital. So while business booms, there are no problems. But given a short term hiccup in earnings, the company suddenly has a liquidity problem.

When you think about supply and demand, demand can fluctuate greatly—especially in the fast technology world we live in today. If demand dries up, this can really take investors by surprise. In a company with high intangible assets, low demand means those assets aren’t really as valuable as reported, and when compounded with low liquidity creates fast problems.

Of course, there’s ways to mitigate both cases. You can intentionally only buy companies with products that are likely to stand the test of time. Consumer staples are good examples.

You could also only buy companies with high return on capital but with stable earnings regardless of the economy [non-cyclical businesses].

But remember that past performance doesn’t equal future results. The farther you move towards return on capital and away from Graham, the further away you get from value investing, in my opinion. Blindly following Buffett doesn’t automatically mean you’re getting discounts to intrinsic value or a margin of safety.

It’s clear that there are other exceptions to the rule. Companies with high return on capital that ended up being low risk after all… high performers and stock market outliers.

To see stocks like that, just glance at Buffett’s previous winning positions.

I just fear that valuation gets lost and the temptation for high return on capital becomes too great. This is even more likely in a bull market. As it’s a relatively new concept, there’s a greater possibility that high return on capital as a metric doesn’t outperform on the same level as say, low P/S or P/B—over the very long term.

All of this analysis makes me respect Joel Greenblatt’s Magic Formula even more. He mitigates the high risk potential of high return on capital by constricting his position holding period to one year. By the time a company with these metrics has a hiccup, Greenblatt has already left the building.

I worry about the fund managers who study Graham but dispel the principles later as they “graduate”. There’s fund managers already who’ve likely proved me wrong with their track record, but they probably did so with a firm understanding of how crucial low valuations are.

Naïve fund managers and investors may see major outperformance by value investing managers in short periods of time, and be seduced too far onto the wrong side of this discussion.