Industries tend to mature in similar ways. We can use this information when analyzing stocks to forecast a probable industry trend. Absent government intervention, we can predictably assume that the laws of economics will be shared across many industries. 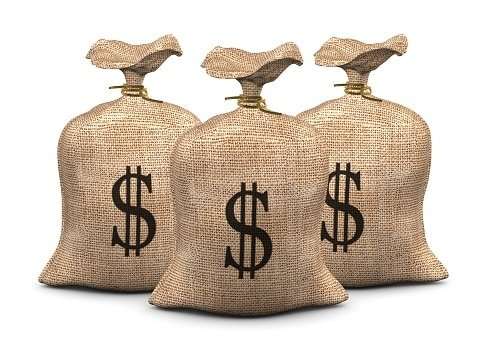 If you can’t tell, I’m getting excited about this topic. My vocabulary tends to get stuffy and academic when I’m fleshing out complex topics. I understand this makes it harder to follow.

Just read the following post with the understanding that this is a relatively new phenomenon that I’ll likely pursue in the future. As such, with my own mastery will come an easier ability to simplify and teach. Like with many things in the stock market, the concept is simple but it’s application is quite complex.

There’s a couple of principles I want to share with you that reach across various schools of thought. Some of the most fascinating discoveries in the world have occurred from a proven hypothesis being tested in a new arena. The possible overlap of principles and ideas really creates more interesting thoughts and ideas.

Whether it’s because of human nature, or the psychology behind the innate desire to belong to a group, this internal choice mechanism seems to apply uniformly.

Marketing experts will tell you that humans prefer choices, but not too many choices. There was a study at Columbia University about two different jam displays, one with 6 choices and one with 24 choices. A whopping 30% of customers who were only exposed to 6 choices ended up buying a product, while only 3% of those presented with 24 choices purchased.

As you can see, the human brain tends to prefer less choices. In a limited choice selection environment such as a Google search, a presentation of 6-10 choices yields a “big three” of winners who follow the 40-20-10 rule.

If you graph the 40-20-10 results, what you’ll see is an exponential curve the decreases along the x-axis. Now, this graph gets interesting because it applies in many other fields of life. It’s also known as the long-tail curve. 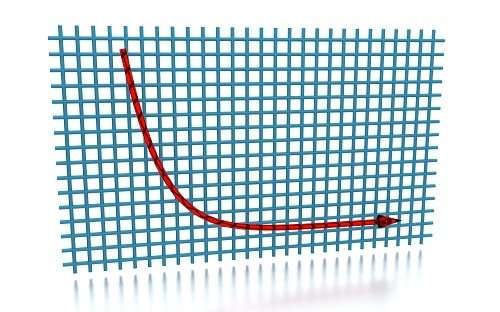 Forbes did an article where they described the performance of workers in a business follows a long tail curve. The top 10%-15% of the population are considered hyper performers, while the majority of workers are just average. At the end of the long tail, you have the small number of workers who are performing very poorly.

Turns out this long-tail, or fat tail, methodology has been discovered a long time ago. An Italian economist and civil engineer Vilfredo Pareto created the Paretian (power law) distribution. In contrast to Gaussian’s law, which is the familiar bell curve that is employed to attempt and express mathematical averages. You’ll see this bell curve in economic contexts, predicting average returns among other things.

Entrepreneurs have adopted the Paretian distribution when it comes to creating sustainable income. In Kevin Kelly’s revolutionary blog post, in which he argues that a content creator only needs to find 1,000 true fans to make a living. Using the same power law distribution, Kelly explains that the true fans will make up a majority of an entrepreneur’s income, in much higher proportions to average fans. Like the “hyper performers” in the Forbes article, most of the results come from a small percentage of the population.

The rule of three is an interesting phenomenon that also expands to other aspects of life. The theme of three is heavily symbolized in religion, with the Holy Trinity of the Father, the Son, and the Holy Spirit, in writing with The Three Stooges, The Three Musketeers, Three Little Pigs, and in rhetoric with catchy phrases ending with three elements: “blood, sweat and tears; tell the truth, the whole truth and nothing but the truth.”

For those who are sports fans and slightly superstitious, you might remember the power of the big 3 in the NBA, with Michael Jordan, Scottie Pippen and Tony Kukoc leading the Bulls to championships, followed by the Celtic’s big three of Kevin Garnett, Ray Allen, and Paul Pierce, followed by the Laker’s Kobe Bryant, Pau Gasol, and Andrew Bynum, followed by the Heat’s Lebron James, Dwyane Wade, and Chris Bosh. Notice that all these teams went on to win championships.

The 40-20-10 principle also plays out according to NBA Finals teams, as illustrated with the following graph: 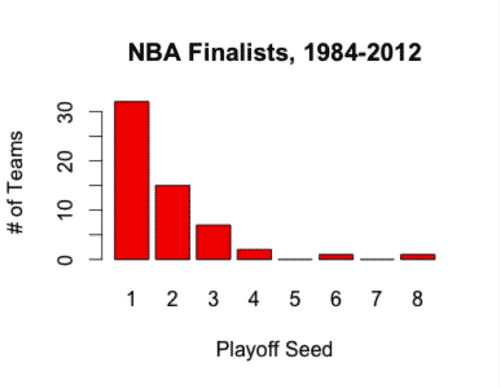 The “big three” playoff seeds are constantly reaping 80% of the rewards. Again, another strange set of data which falls into the long tail chart.

Now I’m far from certain about how these results are being consistently manufactured. I really don’t understand it, and I don’t expect you to. And like any system, there are deviances and extremes from the norm. However, if a theme is constantly playing out in an arena of life, it makes sense to pay attention to it.

Things get really interesting when we look at the rule of three principle as it plays out in competitive free markets. In many matured industries, the size of companies consolidates into three major players, with many of them taking the same 40-20-10 split in market share.

Of these, a few quick examples come to mind. Coke, Pepsi, and Dr. Pepper dominate the drink space, while American, United, and Delta were known as the big three of the airline industry, GM, Ford and Crystler have always competed as American automobiles while Audi, Mercedez-Benz, and BMW lead the German car market.

Two marketing specialists have released a book on the subject called “Rule of Three”. Part of their research is available online in this business journal.

I have yet to read their book but it’s at the top of my to-do list. The ideas that this single concept have whirled in my head has been exhilarating.

I wanted to share this perspective out there and see if anyone else gets excited about applying this to the stock market. Reach out to me if you’re getting as pumped up as I am for this… I’m open for collaborations on my next project.

Now, the way that we can apply this to industry analysis is simple. By looking at all of the competitors in an industry, we can quickly see if the 40-20-10 principle has formed yet. If not, then the opportunity is limitless. Some intense analysis will need to take place to try and find a leader from the chaos.

With some industries, you’ll see aspects of the 40-20-10 principle starting to unfold. In this case, it makes sense to invest in companies that are solidly in the #1 and #2 spots. Or if a top three has generally been established, it can be a good strategy to invest with companies that are below the 40, 20, and 10 percentage knowing that the likelihood of the industry evolving to this structure is fairly positive.

Please, take this concept with a grain of salt. It’s to be a complement to an already successful investing strategy… hopefully one based on value investing like I’ve preached. If you have yet to create such a strategy, read through my old posts and set a solid foundation first.

But for those who have an established investing strategy and are looking to add a little spice to their returns, I think the rule of three can be a new and exciting method that hasn’t really been discovered by Wall Street yet.

I’ve been adding this simple competitive analysis to my philosophy, and so far the results have been great. Let me know if you agree. Leave a comment or reach out to me by email. I read every single one.

I think Pareto was on to something. This one mathematical model may just be the next big financial breakthrough.